Angles of Light and Shadows: The Bare Basics

Today I worked on shadows.
I only covered the very bare basics concerning shadows for these drawings. But tomorrow we're going to have some fun while I will show you how to determine the angle of basic shadows for yourself. For that lesson the tools you will need are: a protractor, regular ruler, plain piece of drawing paper 8" x 10" in size, and two pencils - an HB and a 2B.

Here are the bare bones basics for today:

Have you ever asked yourself, " How can I know at what angle a shadow falls from an object?" Well, here is are a few examples to help you understand just a little bit. Remember, this is just a beginning.

The angle of light on the right side of the box on top is 25 degrees. Again I lightly drew the lines to show how I determined how the shadow should fall at that angle on the left side of the box.

For the box on the bottom of Pic 1, the angle of light on the box from the left side is 15 degrees. This particular angle would be equivalent to a late afternoon/early morning sun. As you can see, the steeper the angle of light, the shorter the shadow is from the object.

You will notice that as the angle gets smaller, the shadow gets longer so that the light at a 15 degree angle casts the longest shadow. 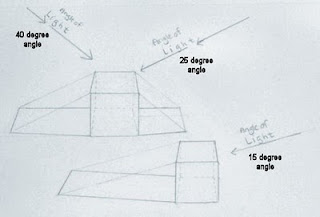 In pic 2, the angle of light on this box is 65 degrees, which is equivalent to the late morning/early afternoon sun. This angle is steep enough to cause very little shadow from the object because the light is coming from almost directly above the box. A perfectly square box will not cast a shadow at high noon because the light is coming from directly above the box and shining straight down on it. 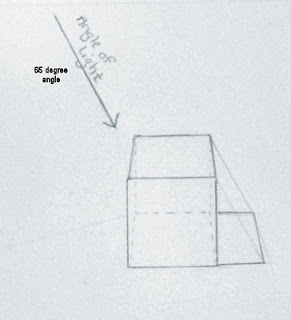 Now these are the very bare basics of angles of light and shadows. What if the light came from the corner of the box at a 40 degree angle rather than hitting it straight on? What would that shadow look like? It's much more complicated at that point to get not only the angle of the shadow correct, but also the shape and length of the shadow.

Tomorrow, be ready to have lots of fun while I show you how to measure the angle of the light and shadows as well as how to measure the length of a shadow. It gets a little bit complicated, so bring your thinking caps so you can get right down to work!
Posted by Reflections From Life Art Blog at 1/18/2010 07:05:00 PM