I have just received a new commission for a portrait of a dog. She's a real sweetheart too! Goldie is a 17 year old mixed breed dog and the love of my client's wife. My client wants this to give his wife for her birthday in August. I think that's sweet, but I'll have to work fast!

I'm going to be doing Goldie on gray Pastelbord, because I don't have to worry about heat & humidity with it. It's a sanded primer painted on a wooden surface, so it's pretty tough stuff. I first did a practice painting of a cat on a 5 x 7 piece of Pastelbord to practice techniques and such since I have never done an animal on this surface before. I don't want to mess up Goldie, so I wanted to make sure of everything before I got started.

I have now sketched out Goldie and have just begun work on the portrait. So far, I have worked on her eyes and nose, but they are not finished yet. They won't be completely finished until the whole portrait is done.

Goldies eyes are now very dark and have cateracts in them. When she was younger, she had more brown in them. I'm lightening her eyes a bit, adding some brown, and taking out the cateracts, but trying to not change them to such a point that they are unrealistic for her age. Her nose needs much more work. I always seem to have trouble with the colors in a dogs nose. Next I will start working more around her nose and eyes, bringing out the 3-D look in them.

The first photo is the entire sketch but not including the background space. I have also included a close-up of her eyes and nose.

Any C&C's are always welcome, especially at this stage! 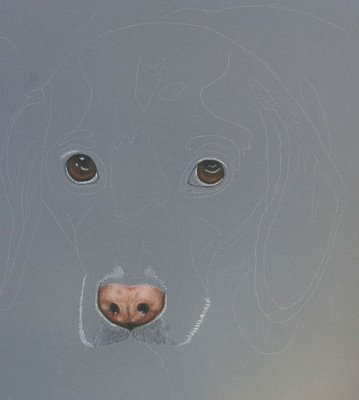 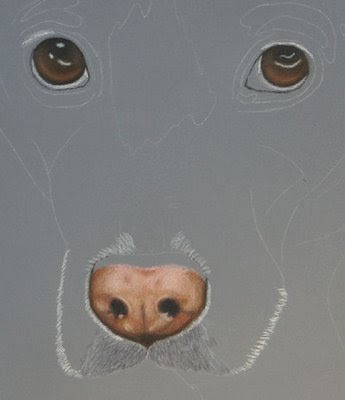 Didn't have to go to McDonald's today because the humidity dropped unexpectedly and I got a chance to spend a few hours on it before the humidity started coming back again. I now have about one third of his uniform done.

Not too long to go now before I'm done!! I can truly see the light at the end of the tunnel! Unfortunately, this photo of the portrait looks a bit on the dark side. I'm currently using my husband's computer and I've found that his monitor tends to be on the dark side, so I really don't know if the colors are off or if it's his monitor. If the photo really is dark, I apologize.
Posted by Reflections From Life Art Blog at 6/28/2008 07:21:00 PM No comments:

I have now started on his uniform. This part should go fairly fast since I have already worked out the palette. I just need the days when I can work on it. The weather's back to being humid, so it's back to McDonald's tomorrow. Also, the face is still unfinished and will be finished when the uniform is done.

Hoping to have this done by the end of the month, first week of July at the latest. Then I have to start on another soldier portrait.

I can see the light at the end of the tunnel on this at long last! 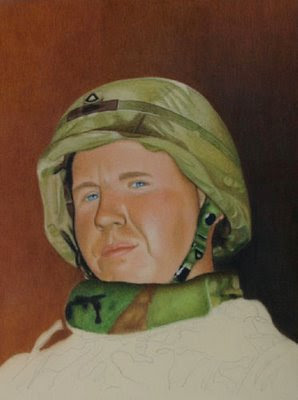 I have now finished the soldier's helmet, but there are still bit & pieces of his face that I am tweaking. His eyebrows mainly. Now I'm onto his uniform. That should go fairly quickly since I have already worked out the palette for it. However, it has turned humid once again here and we currently have a storm passing through, so I may have to go to McDonald's again to get more work done on this. 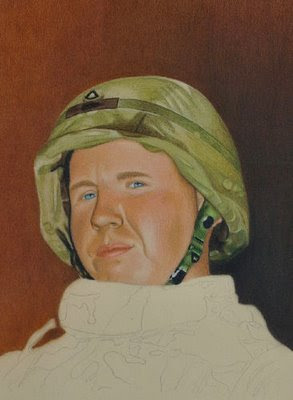 I have managed to get some more done on this portrait. I'm hoping to have this done by this weekend, at the latest by the end of the month.

I still need to work on his eyebrows and I haven't put his eyelashes in yet, other than that and maybe a few other tweaks, his face is almost finished. I'm finishing the helmet right now, then onto his jacket. Of course, the background is completely finished except for some fine tuning around the edges of the soldier after I finish with him. 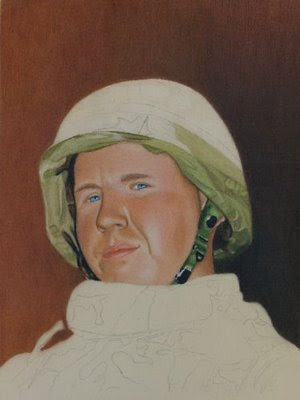 Drawing day was almost a bust for me. We have had a heat wave here you would not believe! Five days of near 100 degree (or more) weather and humidity over 70%, and we don't have A.C.!!! So, not much art got done. I couldn't pull out any paper because it would immediately be ruined. Also, my laptop is going to be shipped back to HP for repair after I go to a photo shoot for a commission this morning, and will be gone for two weeks. I can use my husband's computer, but at the moment, I can't download anything from my digi. So, my updates will be limited for awhile. Hopefully, my soldier portrait will be done by the time my laptop gets back!

I have finally got the background finished on this portrait! Whew! Now, onto finishing the mouth and the eyebrows. Hopefully, we'll have a few more days of low humidity so I can work on this some more. 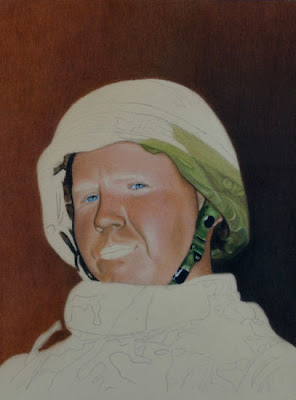 Here's what I was doing while it was too humid to work on the soldier. I decided I wanted to do some more flowers, having been properly inspired by a wonderful pastel artist. My rendition of a tulip is rather sad compared to her gorgeous paintings, but I tried!

This is Prismacolors & Derwent Coloursoft colored pencils on white Pastelbord. It's 8 x 10 and it will be varnished as soon as I am confident that I do not need to do anymore on it; then it will be framed sans the glass.

This is also part of a collection I have started to bring to a gallery in November.

BTW, sorry about the copyright mark. An unfortunate necessity nowadays. 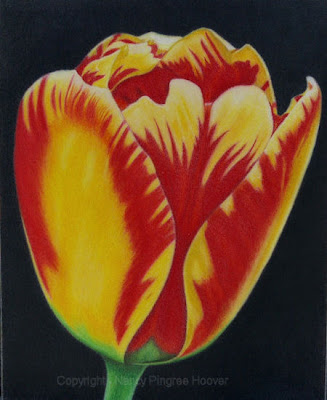