Normally, you all know me for creating artwork in colored pencils, pastels, and graphite. Recently, I decided to try something new. Clay. Polymer clay to be exact. So I've been working with the clay and armatures, trying to figure it out for myself with the help of a couple of websites and one book in particular called "Fantasy Creatures in Clay: Techniques for Sculpting Griffins, Dragons, and More" by Emily Coleman.  It's a great book, and very informative.

I had also been working on "Trail of Painted Ponies" statues. I decided to see if I could combine both of them. I found some black clay with gold glitter in it and thought it would look interesting as a horse. I had not gotten the results I wanted by painting the horse statues, so I thought maybe I could literally drape the resin statue with a very thin sheet of that black gold glitter clay. So I did it.  Not real keen on the results, but I know how I would do it differently if I did it again. I also went crazy making all different bases for it and other statues I'll be working on. Now, I have made the armatures for the wings for the horse, and I've begun putting the clay on. I have most of the clay on one wing, but no details and haven't finished shaping each feather yet. It will look much better when I finish all of that, but for now, this is the point I am at.

I have posted some unedited photos for you to see. Some of the photos were taken with my cell phone, some with my camera, but none of them have been edited at all.

The resin horse statue is layered with Fimo Effects Polymer Clay. The color is called "Twinkle, Twinkle." The base is also made of Fimo Effects clay, this one is called "Opal." It is a very hard color to work with because whatever they use for the glitter and sparkly stuff is very chunky and hard to roll out and keep it from falling apart. It may also be old clay and it's just quite dry. The base, as you can see, is just very simple. 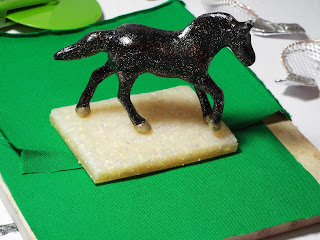 The armature for the wings was made with 16 and 20 gauge armature wire and aluminum mesh with a little tinfoil. I didn't get a photo of the armature after it was completed. I used a glue gun to add some wire to the mesh which would give the longer feathers some stability. 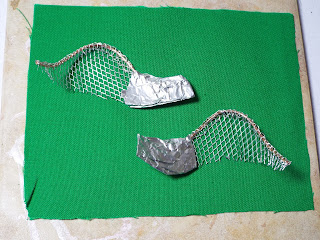 These last two photos show the clay being added to the wings. In these pictures I have the wings looking a little mussy, you know, not orderly and straight. More like they are being windblown, which they are because they are going to be placed on a cantering horse. But, I'm not sure I want to keep it this way. Plenty of time to decide before I bake them.

There are no details yet and still a lot of shaping to do as well to each feather, so they are not even close to being completed. I took the photos from two different angles. 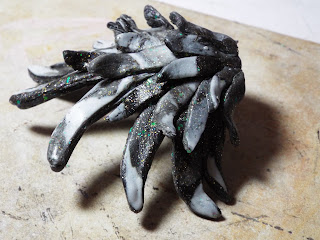 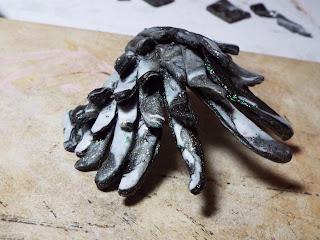 The clay I used for the wings was "Twinkle, Twinkle" and " "Glitter White." I blended them together in odd ways to make it look more interesting and to go with the "Stardust" name. I also added several different colors of glitter to the clay before blending the two colors together, which is why you can see some odd colors and glitter in the feathers.

Well, that's where I'm at right now. I might be able to finish this wing within the next week, so I can get started on the second wing.

This whole thing, the horse, the base, and the wings are all loaded with sparkly, glittery stuff. I think I over did it a bit much.


One more photo for you. This is another base I made for another statue. As you can see, this is a two-tiered granite base. It was made with Fimo Effects clay. The color was called "Gray Granite" (surprise, surprise). 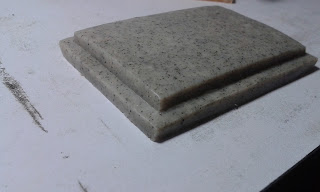 So, there you are. This is what I have been working on lately.

I apologize for not posting regular blog articles for quite awhile now, but I'm trying to get back into the swing of it. I will try very hard to do better for now on.

Thank you for reading this article. I hope you enjoyed it.