Here are updates for two paintings I am currently working on. First is the update on the soldier. I have pretty much finished the flag, except for the stars, which I haven't even started yet. I need to tweak the flag's colors a bit, but I guess it's okay for the most part. 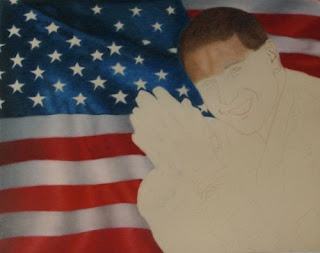 Second is a new portrait I'm working on. This is Jessica, a young lady of 13 years who goes to my church. She's obviously a beautiful young lady and I've been wanting to paint her for a few years now. I was fortunate to have a few moments of photo shooting with her a couple of weeks ago, and came away with fantastic shots!! I just had to paint her right away! I need to see if I can set up some more photo shoots with her. She's a natural model.

This is on white Pastelbord with Prismas. I really have developed a preference for working on gray Pastelbord, especially for portraits, however, I do not have any gray bord at the moment. So, I used Neocolor II steel gray to create the gray underpainting instead. I would lay down a layer of Neocolor, brush it, let it dry, and do it again. I put down probably five layers total, one at a time. It worked out beautifully! I was worried about the tooth with using that much Neocolor, but there's plenty of tooth left. Lesson learned: I can buy white Pastelbord and use Neocolors for the underpainting instead of stocking up on all the different colors and sizes of Pastelbord! Of course, this also used up most of my Neocolor as well, but that's still cheaper in the long run - I think.

I have been using Ann Kullberg's tips on doing hair from her Portrait CD, because we all know I stink at doing hair. I think it's coming out okay, although I will still be tweaking it and adding some stray hairs, etc. I'll start on the other side of her hair next. 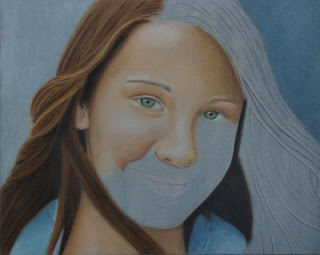