Have any of you artists out there ever used a stock image to create a traditional or digital piece of art? Let me ask you how do you use the stock images you download:

1. Do you COPY THE PHOTO EXACTLY?

2. Do you CHANGE A LITTLE BIT of the photo?

3. Do you ONLY USE A LITTLE BIT of the photo?

4. Do you simply USE THE PHOTO MERELY AS A REFERENCE along with an assortment of other ref photos?

What are the pros & cons of each of the above responses? Below I discuss briefly each of the four ways to use a ref photo, one by one. Read on:

1. Copying a photo EXACTLY for creating a piece of art has several downfalls:

1a.) Cameras distort reality - Unless you really understand how this happens, you will end up copying the distortion into your artwork, which will ultimately take away from the beauty of it and it will be a red flag to others that you have copied a photo exactly.

1b.) Copying exactly does not allow you to grow as an artist - Not only does it hinder your growth, but your own creativity is also hindered because you are at the whim of other photographers. Even if you use your own photos as reference material, if you copy the photo exactly you are limiting your ability to put together your own composition. There are two exceptions to this downfall - one is if you are a beginner and two is if you compose your photograph before taking the picture. Both of these are discussed further below.

1c.) In copying a photo, you may be breaking copyright law! Even in online public stock sites that have copyright-free photos, it’s hard to know for sure which photos may themselves be stolen from someone and which ones are really owned by the photographer displaying them.

Here is an example of copying from a ref photo:

On the left you see my painting and on the right you see the ref photo. This is my own photo that I took of a cat named Dusty. I cropped the photo, made the colors a bit more vibrant, and changed Dusty’s coloring a bit (since I know him personally and know his coloring to be a little different from the photo). I guess you could also argue that I changed a little bit of the photo, but essentially it is the very same as the photo, I just have made a few very minor changes. 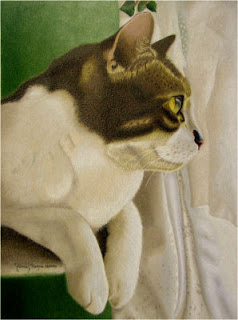 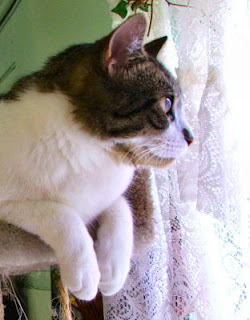 Here are the advantages of copying photos:

1d.) If you take your own reference photos, and you compose your own picture rather than just happening upon a scene and snapping a picture, than you are getting EXACTLY what you wanted in a piece of art. Often times artists do this when it's either impossible or very inconvenient to work with subjects from life. Also, there are some incredible photographers out there who take some amazing photos that you just feel drawn to painting. Just be sure to thoroughly check out the photo for camera distortion first and correct it! This is one of the exceptions to copying photos hindering your growth as an artist.

1e.) If you are a new artist and are learning, using someone else's photo as a subject to paint, draw, etc., is one of the best and most convenient ways to learn. It's how I taught myself how to draw. But, you also need to research and understand camera distortion if you are going to do this. After copying a few photos, try making a few changes to a photo. Change the colors, add something to it, take something out, change the lighting, etc. There’s a multitude of ways you can change a photo. Each time thereafter, try to make more and more substantial changes to the ref photo you are using. By doing so, you will be challenging yourself as an artist and your skills will increase. This is one of the exceptions copying photos hinders your growth as an artist.

1f.) If you are creating ACEO’s, or miniature art, I find that I need to focus on one subject close-up because I am a detail freak and that is the only way I can get the details into a picture that’s so small. Thus, I usually crop, flip, or otherwise move the subject around before painting it from my ref photo, unless it is macro photo, which is already a tight crop of the subject. You can take a photo of an entire flower, and crop it so it only shows a close-up of the very middle of the flower, or crop it in some other way to only a portion of the flower. You can do the same thing with animals and even people.

2. Changing a little bit of a photo:

Changing a little bit of a photo simply means changing an item, such as a piece of furniture or removing the background, changing the color, turning a black & white into color, etc., but still using the majority of the photo as is.

Here is an example of changing a little bit of a photo:

On the left below is a painting I made of Bentley, a dog I was commissioned to paint. On the right is one of the photos I took during a photo shoot with Bentley. I chose to use this photo for the painting because it caught Bentley's personality. However, as is often the case with photo shoots I couldn't control the background very much. So, in painting the portrait I had to change the background to eliminate the sofa and loveseat from behind the dog. I simply put in a simple gradient background. 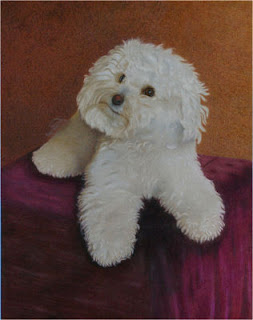 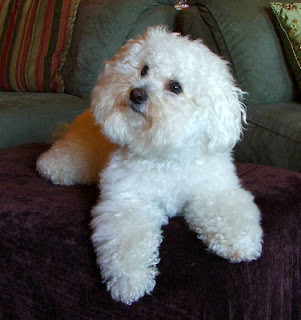 Using a little bit of a photo means only using one item in or just a little piece of a photo, such as the leaves of a plant or a tree, the background, one of the buildings, one bird in a flock, etc. Usually when a person uses only a little bit of a ref photo it’s because they are also using several other ref photos in the same way, and putting together their own composition. By using this method you are using a great deal of your own imagination to put together your composition. This is generally the next step from copying photos. This is acceptable as long as you use the subject/item in the ref photo in such a way that you cannot really tell for sure that it came from that particular photo, in other words, you have included other items/subjects, changed the lighting and/or the colors, etc.

Two examples of using a little bit of a photo.

Example 1: Say you are creating a composition of kittens playing. You want several kittens to be in the painting, but you have no real live kittens to work with. So, you search for just the right photos with kittens in certain positions. You chose several different photos of kittens, but you only use one kitten from each photo. You then put those kittens together in your own composition, thus creating your own unique work of art.

Example 2: This is a piece I created using my friend, John Houwaart's tiger photo - with permission of course. I cropped it to do just a macro shot of the tiger rather than the whole body. You would never know by looking at it exactly whose photo I used to get this shot, it could be from any head on shot of a tiger. In addition, I turned this painting into a banner that I am currently using on my online journal. Next to the painting is the original photo I took the crop from. 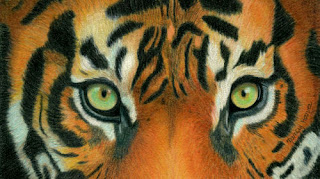 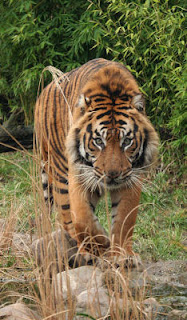 4. Using the photo merely as a reference.

The best way to describe this is to give you an example:

You want to do a painting of a cardinal on a branch in a tree. You have your own ref photo of the bird and of the tree that you want to use, but it is from further away than you would like and you can't make out all of the bird's features very well. You search for cardinal photos and find several you like in similar positions. You do not copy any of them but simply look at them to see how the bird's beak is shaped, look at another one to get a better idea of the feather coloring, etc. much like an artist often uses several photos to do a commission on one subject. Each photo offers different views, different positions, different lighting, etc. and you look at each one for a specific reason, but never actually copy any one photo. This offers the greatest amount of creativity and challenge for the artist (other than creating a composition directly from your head, using NO reference at all, which not all artists can do).

Using photos as a reference for creating traditional or digital pieces of art is perfectly fine as long as you keep a few things in mind:

4a. Keep camera distortion in mind when copying and be sure to correct for it.

4b. Follow all copyright rules when using other people's photos!! There is a difference between exclusive rights and permission to use a photo simply as a reference. Don't confuse them! (I will cover these differences in another entry).

If you do use ref photos to create artwork, it is always best to use YOUR OWN photos!!! This especially applies if you intend on putting your artwork in a show or selling it. You don't want to damage your reputation just so you can use someone else's photo as a ref, do you?!